Estació Barcelona Nord closes the summer season recovering the volume of activity before the pandemic. Between June and August, have been more than 41,000 coach arrivals, which represents an increase of 48% compared to the previous year and equals the datum of 2019. The number of passengers who have have been in the station during these months exceeds 700,000. They are as many as before the pandemic and 65% more than last year.

During this summer, the lines with international destinations have stood out, which have grown by 32% compared to last year and 14% more than in 2019. The destination with the most departures has been France, followed by Italy. In the Catalan territory, the lines with the most trips and passengers have been those going to the Costa Brava, with 50% more arrivals and departures from Estació Barcelona Nord than the previous year. The next most frequent destination has been the Pyrenees area, followed by the line that leads to Cardedeu, which stops at La Roca Village and the Girona’s Airport one. This summer, the number of touristic day tours from the Station has also tripled.

As part of the transformation project that has led Estació Barcelona Nord to become a new tourist mobility hub, this year the number of operators and one-day tourist excursions has been increased, in addition to the incorporation, in the month of June, of the point of information and sale of tourist products of Barcelona Turisme. In addition, the datum for this high season confirms that the Station is consolidating itself as a point of reference for departures and arrivals of regular buses to national and international destinations. 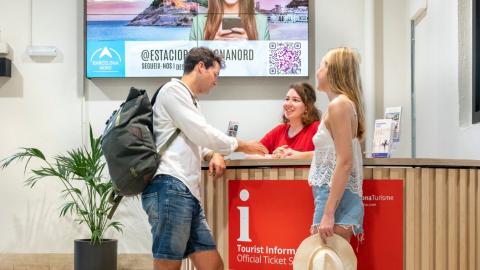